St. Symeon: “We bear witness that ‘God is light’…”

St. Symeon the New Theologian (949-1022) was a 10th century mystic monk. His many direct experiences of God (theoría) convinced him that all Christians must have an actual baptism of the Holy Spirit in addition to the ritualized water baptism and chrismation of the church.

His mystical experiences also taught him that God is always received in the form of divine light. Symeon wrote about that light and its power to transform: 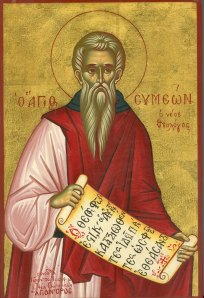 This entry was posted on June 16, 2014, 7:27 AM and is filed under Hesychasm - Jesus Prayer, Patristic Pearls. You can follow any responses to this entry through RSS 2.0. You can leave a response, or trackback from your own site.