Metropolitan Hierotheos (Vlachos) – (1945-    ) is a Greek Orthodox metropolitan and theologian. He graduated from the Theological School of the University of Thessaloniki and is one of the finest Patristic scholars living. 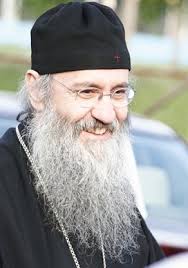 “The term “Orthodox Psychotherapy” does not refer to specific cases of people suffering from psychological problems of neurosis. Rather it refers to all people. According to Orthodox Tradition, after Adam’s fall man became ill; his “nous” was darkened and lost communion with God. Death entered into the person’s being and caused many anthropological, social, even ecological problems. In the tragedy of his fall man maintained the image of God within him but lost completely the likeness of Him, since his communion with God was disrupted. However the incarnation of Christ and the work of the Church aim at enabling the person to attain to the likeness of God, that is to reestablish communion with God. This passage way from a fallen state to divinization is called the healing of the person, because it is connected with his return from a state of being contrary to nature, to that of a state according to nature and above nature. By adhering to Orthodox therapeutic treatment as conceived by the Holy Fathers of the Church man can cope successfully with the thoughts (logismoi) and thus solve his problems completely and comprehensively.”  ~ Met. Hierotheos Vlachos, from “Orthodox Psychotherapy – The Science of the Fathers”

This entry was posted on August 21, 2015, 3:27 PM and is filed under New Nuggets. You can follow any responses to this entry through RSS 2.0. You can leave a response, or trackback from your own site.