Evagrius Ponticus (c.346-399) – was originally from Pontus, on the southern coast of the Black Sea in what is modern-day Turkey. He served as a Lector under St. Basil the Great and was made Deacon and Archdeacon under St. Gregory of Nazianzus. In order to deal with his personal sin, Evagrius retreated to the Egyptian desert and joined a cenobitic community of Desert Fathers. As a classically trained scholar, Evagrius recorded the sayings of the desert monks and developed his own theological writings. 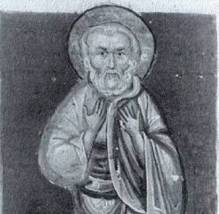 In AD 375, Evagrius developed a comprehensive list of eight evil “thoughts” (λογισμοι; logísmoi), or eight terrible temptations, from which all sinful behavior springs. This list was intended to serve a diagnostic purpose: to help his readers (fellow desert monks) identify the process of temptation, their own strengths and weaknesses, and the remedies available for overcoming temptation.

The order in which Evagrius lists the “thoughts” is deliberate. Firstly, it reflects the general development of spiritual life: beginners contend against the grosser and more materialistic thoughts (gluttony, lust, avarice); those in the middle of the journey are confronted by the more inward temptations (dejection, anger, despondency); the more advanced, already initiated into contemplation, still need to guard themselves against the most subtle and “spiritual” of the thoughts (vainglory and pride). Secondly, the list of eight thoughts reflects the threefold division of the human person into the appetitive (επιθυμητικόν; epithymitikón), the incensive (θυμικόν; thymikón), and the intelligent (λογιστικόν; logistikón) aspects. The first part of the soul is the epithymikón, the “appetitive” aspect of the soul. This is the part of the soul that desires things, such as food, water, shelter, sexual relations, relationships with people, and so on. The second part of the soul is the thymikón, which is usually translated the “incensive” aspect. This translation is a bit misleading. The thymikón is indeed the part of the soul that gets angry, but it also has to do with strong feelings of any kind. The third part of the soul, the logistikón, is the “intelligent” or “rational” aspect of the soul. The part of the logistikón that thinks and reasons is called the diánoia (διάνοια), but it is not as important to Evagrius and the other Greek Fathers as the nous (νου̃ς), the “mind”, or to be very precise, the part of the mind that knows when something is true just upon perceiving it.

Gluttony, lust, and avarice are more especially linked with the appetitive aspect; dejection, anger, and despondency, with the incensive power; vainglory and pride, with the intelligent aspect.

Evagrius’ disciple, St. John Cassian, transmitted this list of the eight “thoughts” to the West with some modification. Further changes were made by St. Gregory the Great, Pope of Rome (AD 590 – 604) and these came down to the West through the Middle Ages as the “Seven Deadly Sins” of vainglory, envy, anger, dejection, avarice, gluttony, and lust.