St. Gregory Palamas (Greek: Γρηγόριος Παλαμάς; 1296–1359) – was a monk of Mount Athos in Greece and later the archbishop of Thessaloniki, known as a preeminent theologian of Hesychasm. The teachings embodied in his writings defending Hesychasm against the attack of Barlaam are sometimes referred to as Palamism, and his followers as Palamites. 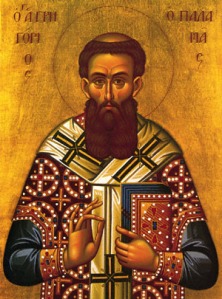 “In mystical contemplation a man sees neither with the intellect nor with the body, but with the Spirit; and with full certainty he knows that he beholds supernaturally a light which surpasses all other light. But he does not know through what organ he beholds this light, nor can he analyze the nature of the organ; for the ways of the Spirit, through which he sees, are unsearchable. And this is what St Paul affirmed, when he heard things which it is not lawful for man to utter and saw things which none can behold: ‘ … whether in the body or whether out of the body, I cannot tell’ (2 Cor. l2:3) – that is, he did not know whether it was his intellect or his body which saw them. For he did not perceive these things by sensation, yet his vision was as clear as that whereby we see the objects of sense perception, and even clearer still. He saw himself carried out of himself through the mysterious sweetness of his vision; he was transported not only outside every object and thought but even outside himself.

This happy and joyful experience which seized upon Paul and caused his intellect to pass beyond all things in ecstasy, which made him turn entirely in upon himself, this experience took the form of light – a light of revelation, but such as did not reveal to him the objects of sense perception. It was a light without bounds or termination below or above or to the sides; he saw no limit whatever to the light which appeared to him and shone around him, but it was like a sun infinitely brighter and larger than the universe: and in the midst of this light he himself stood, having become nothing but eye. Such, more or less, was his vision.”  ~ St. Gregory Palamas in Triads, I.iii. 21