The Jesus Prayer (Greek: Η Προσευχή του Ιησού, i prosefchí tou iisoú); or “The Prayer” (Greek: Η Ευχή, i efchí̱ – literally “The Wish”) is a short formulaic prayer esteemed and advocated especially within the Eastern Orthodox Church.  The prayer has been widely taught and discussed beginning in the 4th and 5th centuries.  It is often repeated continually as a part of personal ascetic practice, its use being an integral part of the eremitic tradition of prayer known as Hesychasm (Greek: ἡσυχάζω, isycházo, “to keep stillness”). The prayer is particularly esteemed by the spiritual fathers of this tradition (see Philokalia) as a method of opening up the heart (kardia) and bringing about the Prayer of the Heart (Καρδιακή Προσευχή). The Prayer of The Heart is considered to be the Unceasing Prayer that the apostle Paul advocates in the New Testament (1 Thess. 5:17).

Practical Steps for the Jesus Prayer

1. Sit or stand in a dimly lit and quiet place.
2. Recollect yourself.
3. With the help of your imagination find the place of the heart and stay there with attention.
4. Lead the mind from the head into the heart and say, Lord Jesus Christ, have mercy on me
5. Quietly with the lips or mentally, whichever is more convenient; say the prayer slowly and reverently.
6. As much as possible guard the attention of your mind and do not allow any thoughts to enter in.
7. Be patient and peaceful.
8. Be moderate in food, drink, and sleep.
9. Learn to love silence.
10. Read the Scriptures and the writings of the Fathers about prayer.
11. As much as possible avoid distracting occupations.

Level 1
It begins as oral prayer or prayer of the lips, a simple recitation defined as a verbal expression. Although very important, this level of prayer is still external to us and thus only the first step, for the essence or soul of prayer is within a man’s heart and mind.

Level 2
As we enter more deeply into prayer, we reach a level at which we begin to pray without distraction. At this point, the mind is focused upon the words of the prayer, speaking them as if they were ones own.

Level 3
The third level, is prayer of the heart. At this stage prayer is no longer something we do but who we are. Such prayer, which is a gift of the Spirit, is to return to the Father as did the prodigal son. The prayer of the heart is the prayer of adoption, when “God has sent the Spirit of his Son into our hearts, crying, ‘Abba, Father!’ (Galatians 4:6)

Stages of Growth in the Prayer of the Heart

1. Try to…enclose your thought in the words of the [Jesus] prayer. If on account of its [the mind’s] infancy it wearies and wanders lead it in again. The mind is naturally unstable. But He Who orders all things can control it.

2. The beginning of prayer consists in banishing the thoughts that come to us at their very appearance…

3. Quantity is the cause of quality. The Lord gives pure prayer [prayer of the mind in the heart] to him who, eschewing laziness, prays much and regularly in his own manner, even if it is marred by inattention.

4. …the middle [of prayer] is when the mind stays solely in the words pronounced vocally or mentally…If, therefore, you tirelessly train your mind never to stray from the words of the prayer, it will be there even at mealtime.

5. The spiritual land of a man pure in soul is within him…Try to enter the cell within you and you will see the heavenly cell. They are one and the same…The ladder to the Heavenly Kingdom is within you. [Luke 17:21]

Using a Prayer Rope (Komboskini or Chotki) with the Jesus Prayer

…those who excelled in prayer, in order to avoid being subject to this self-deception, invented the prayer rope, which they proposed for the use of those who seek to pray not with written prayers, but on their own. They used it as follows:

1. They said, “Lord Jesus Christ, have mercy on me a sinner,” and moved one knot with their fingers;

2. Then, they said this again and moved another, and so on;

3. Between each short prayer they made a bow from the waist** or a prostration,* as desired, or…

4. Between small knots they made a bow from the waist and at the larger knots or beads a complete prostration.*

* A prostration consists of dropping to both knees and leaning forward on the hands until the head touches the ground.

** Saint Hieromartyr Cosmas Aetolos (d. 1779) suggested the Sign of the Cross: …hold it [prayer rope] in your left hand and cross yourselves with your right hand and say: ‘Lord Jesus Christ have mercy on me’

The prayer rope (Greek: κομποσκοίνι, “komboskini”; Russian: чётки, “chotki”) is part of the habit of Eastern Orthodox monks and nuns and is employed by monastics and by others, clergy and laity alike, to count the number of times one has prayed the Jesus Prayer or, occasionally, other prayers. The prayer rope is traditionally made out of wool, symbolizing the flock of Christ. The traditional color of the rope is black (symbolizing mourning for one’s sins), with either black or colored beads. The beads (if they are colored) are traditionally red, symbolizing the blood of Christ and the blood of the martyrs. Prayer ropes are tied in a loop, terminating in a cross.  The original prayer rope had 33 knots to symbolize the age of Jesus Christ when he died. Prayer ropes may come in different lengths in addition to the 33 knot standard to include 50 knot, 100 knot, and even 300 knot lengths. 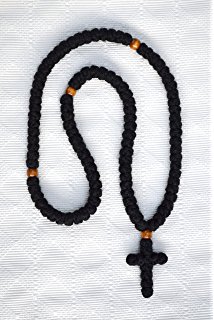 Though prayer ropes are often tied by monastics, lay persons are permitted to tie them also. In proper practice, the person tying a prayer rope should be of true faith and pious life and should be praying the Jesus Prayer the whole time.

Origins
The invention of the prayer rope is attributed to Saint Pachomius in the fourth century as an aid for illiterate monks to accomplish a consistent number of prayers and prostrations in their cells. Previously, monks would count their prayers by casting pebbles into a bowl, but this was cumbersome, and could not be easily carried about when outside the cell. The use of the rope made it possible to pray the Jesus Prayer unceasingly, whether inside the cell or out, in accordance with Saint Paul’s injunction to “Pray without ceasing” (I Thessalonians 5:17).

The Seven-Cross Knot
It is said that the method of tying the prayer rope had its origins from the Father of Orthodox Monasticism, Saint Anthony the Great. He started by tying a leather rope with a simple knot for every time he prayed Kyrie Eleison (“Lord have Mercy”), but the Devil would come and untie the knots to throw off his count. He then devised a way—inspired by a vision he had of the Theotokos—of tying the knots so that the knots themselves would constantly make the sign of the cross. This is why prayer ropes today are still tied using knots that each contain seven little crosses being tied over and over. The Devil could not untie it because the Devil is vanquished by the Sign of the Cross.

Using the Prayer Rope
When praying, the user normally holds the prayer rope in the left hand, leaving the right hand free to make the Sign of the Cross. When not in use, the prayer rope is traditionally wrapped around the left wrist so that it continues to remind one to pray without ceasing. If this is impractical, it may be placed in the (left) pocket, but should not be hung around the neck or suspended from the belt. The reason for this is humility: one should not be ostentatious or conspicuous in displaying the prayer rope for others to see